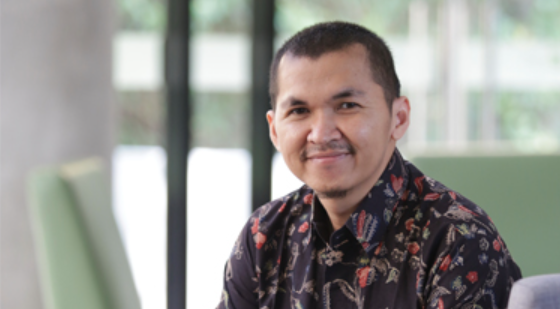 Teacher trainer Dede Supriyanto believes children with disabilities can grow to their fullest potential when teachers, parents and caregivers develop skills to communicate with them.

When Dede was studying special education for his undergraduate program at the Indonesia Education University (Universitas Pendidikan Indonesia) in 2007, he noticed that his blind school friends were successful when they were given opportunities and appreciated.

Fast-forward to 2018, Dede was accepted to study the Multiple Disabilities with Visual Impairment (MDVI) in Education Leadership Program at Perkins International in the United States.

His mentor challenged him to help a four-year-old deaf-blind boy who had trouble learning and always disrupted the class. He accepted the challenge. As the first step, Dede tried to build an attachment with the boy by singing with him.

“He went singing ‘na, na, na,’ and I followed his tunes. Soon he realised that there was someone paying attention to him. So he started to sing different tunes. He wanted to communicate with me,” said Dede.

Dede deepened his expertise when he graduated with a Master’s degree in special education from Flinders University in 2016 with an Australia Awards Scholarship.

“So, no matter how complex their condition is, if we find ways to go into their world and learn ways to communicate with them, they are really smart. They have potential to be developed.”

Most special education schools in Indonesia don’t have a learning strategy for children with MDVI. Schools and teachers may not be aware that they have MDVI children in their school, or treat them as either blind children or children with intellectual disabilities.

“A deaf-blind child or a blind child with Cerebral Palsy obtains information from their remaining senses, such as taste, touch, and smell,” said 38-year-old Dede. “If the teachers don’t understand this, they will only give information verbally or visually, which children with MDVI won’t be able to pick up.”

The lack of facilities and skilled teachers means a high percentage of children with MDVI in Indonesia leave school. Some parents decide to pull their children out of school after 2-3 years because they don’t see significant progress.

“Many of these children eventually end up just sitting or sleeping all day because there are no activities for them to do. Parents also keep their expectations low. If their children can go to school and don’t stay at home, that’s enough for the parents,” said Dede.

The project was first implemented in Bandung, West Java, in 2019 after Dede completed his study at Perkins International. Later on, with funding from the Alumni Grant Scheme, Dede developed a similar program in Yogyakarta.

In Yogyakarta, the project is run in two special schools – SLBN 1 Bantul and SLBN Pembina Provinsi Yogyakarta – with SLB BG Hellen Keller as the project’s partner school. The two schools were selected as they have a high proportion of children and young adults with MDVI, ranging from 8 – 26-year-olds. At the end of the project, the two schools will become models for other schools in Yogyakarta and other regions in Indonesia.

Sixteen teachers and 16 parents and caregivers participated in the program. The first training for teachers was held in May 2019, examining the diversity of children with MDVI, how to identify them, and various teaching methods.

“For deaf-blind students, for example, teachers can’t use visual or auditory senses, it has to be something concrete that can be touched,” Dede explained.

One of the methods the teachers learned was the tactile schedule, in which the teacher uses real objects and Braille for the child’s daily timetable. Another technique was hand-under-hand guidance to explain an action or object to children with MDVI.

Next, the teachers did on the job learning, where they identified and assessed children with MDVI in their schools. In the second phase of the training, the teachers learned to develop curriculum and learning strategies.

As part of the program, a series of workshops for parents and caregivers aimed to improve parents’ participation in their child’s education, for example by involving them in developing the curriculum for their child. While most curricula excludes parents, Dede believes they should not rely only on schools and be able to develop activities for their child at home.

In the workshops, parents learned their child’s potential can be developed and how to involve their child in activities at home.

“Normally, schools invite parents only to attend meetings, and don’t train them to do something for their child at home. Parents are not seen as having a great role in education,” said Dede.

“We want to build parents’ confidence that no matter how hard their child’s conditions, they are able learn. These children have potential.”