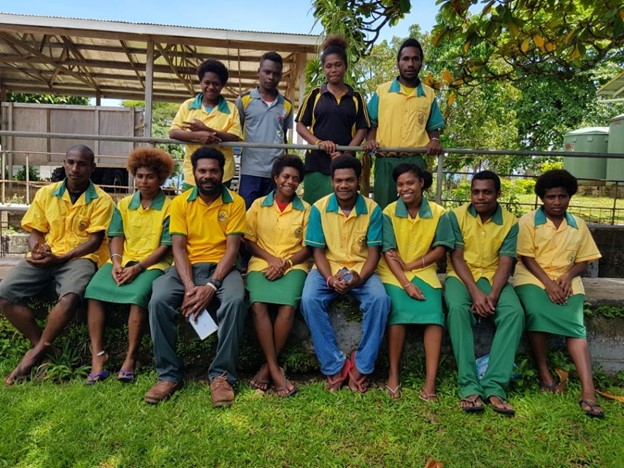 Breaking down gender biases in education and career opportunities through IF4

By supporting infrastructure improvements and norm changes that create a more equitable learning environment, the PNG-Australia Partnership’s Incentive Fund Phase 4 (IF4) program is working to empower new generations of women and close the educational divide between girls and boys.

In the Pomio district of East New Britain province girls have a lower literacy rate than boys (57% compared to 70%), with many students from remote parts of the district, especially girls, finishing schooling at grade eight. A survey conducted among female students at the local Palmalmal Secondary School found that only 30% wanted to go to tertiary institutions, and only 20% of those wanted to pursue high paying white-collar ‘men’s’ jobs like medicine, law, or accounting. Just 1% wanted to be a leader.

In addition to funding infrastructure improvements, IF4’s requirement to promote gender equality and social inclusion (GESI) encouraged the school administration to make a range of changes, embedding GESI practices as a ‘new normal’. This included introducing an alphabetized roll call list (where previously all male students were called before female students), mixed seating arrangements in the classroom and at meal times (where students were previously separated by gender), and desegregation of work tasks and school sports, so that both girls and boys were given equal opportunity and encouraged to participate in previously segregated activities.

Engagement of women in the new infrastructure construction activities – including as labourers and through vocational work placements, roles previously only filled by men – also worked to set new norms for students, demonstrating that women can do similar roles to men when given the opportunity and appropriate support. This was further emphasised when a female engineer gave motivational talks to the girls at the school, broadening the mindsets of students (and community members) about future career opportunities for girls.

This combination of initiatives – some of which did not require any money – has shown that relatively small actions can make a real difference in changing perceptions, attitudes, and gender norms. The changes at Palmalmal Secondary School mean that girls and boys now interact more equally. Where previously girls were more timid (allowing boys to take the lead in talking and presenting), they are now more vocal and confident in class. These steps have also encouraged greater cooperation between boys and girls, breaking down communication barriers to create a more inclusive learning community. Almost a year after completion of the IF4 project, the school continues to implement GESI practices and changes have been maintained.

The IF4 Palmalmal Secondary School infrastructure upgrade project shows that by embedding GESI in funding requirements, partner organisations can be encouraged to meaningfully integrate GESI strategies in project activities, identifying opportunities that may have otherwise been overlooked. This enhances broader project benefits, particularly for the most vulnerable.