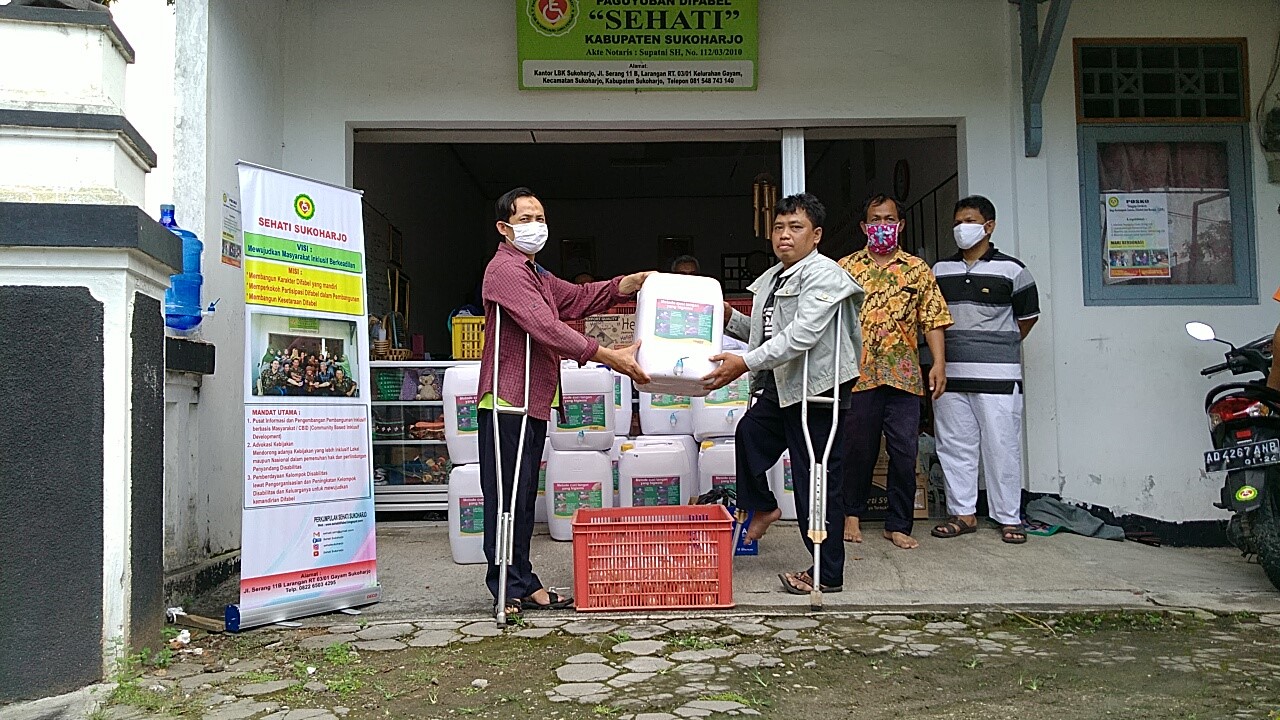 Giving voices to voiceless communities during the pandemic

“The first two weeks of the pandemic were the hardest, we got so many reports about our friends with disabilities and elder people who needed support,” said Edy, who had polio when he was a child, and uses crutches.

After a series of discussions, Edy and his friends decided to initiate a ‘command post’ locally known as “Posko Komando,” to gather data about people who needed assistance.

Using WhatsApp, Edy’s group was collecting and verifying data, and sharing the information with the local Sukoharjo district government.

The district government responded well. They could receive up-to-date and verified data on the people who needed aid more quickly than if it was gathered officially. SEHATI’s vast network also helped reach more people in remote villages.

SEHATI’s data identified at least 3,500 people with disabilities, elderly and other vulnerable members in Sukoharjo, in need of aid and access to information, health and other services.

“Through the local government’s social agency, we ensure people on our list get access to public health insurance. As time has passed, we have also begun collecting data on children and elderly people. That’s why we called our command post the Posko ‘LDR’” (lansia dan kelompok rentan, or elderly, and other vulnerable groups).

Apart from continuing the aid distribution, the organisation began to assist local authorities in developing more inclusive guidelines for Communication, Information and Education.

When the local government set up “Rumah Sehat COVID” as a quarantine house, Edy and his friends ensured that the inclusive concept was well implemented. One villager with impaired sight was among those who used the facility.

“We helped train some health workers about disability sensitivity, manners in delivering service and so forth,” he said, adding that until now, his organisation is still in regular contact with the local government agencies.

Edy claims that there had been a lot of positive changes following collaboration with local authorities during the pandemic, particularly in terms of the government’s stance toward people with disabilities.

Apart from the growing solidarity during the pandemic, Edy says it has also helped to raise awareness of the importance of valid and verified data.

Through the Peduli program, SEHATI has worked to form sixty sub-head groups (SHGs) at the village level across Sukoharjo. The SHGs lead and organise their respective communities; doing the advocacy works and keeping tab with the village administrative tasks.

Edy is an alumnus of the Organisational Leadership and Management Practices for Disabled People’s Organisations Short Term Award ran by the Sydney Southeast Asia Centre at the University of Sydney in 2016 and funded by Australia Awards, where he gained more experience in community management and advocacy strategy. He is also a recipient of the Alumni Grant Scheme for his project in Java.